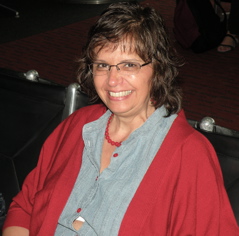 Yesterday we rose with that grungy feeling that comes from waking too early in a strange room to the raucous buzz of a wake-up call. We allowed a full hour to get ready — at least half of which I wasted slowly withdrawing from bizarre dreams — but even so, we made it downstairs just in time to walk onto the shuttle.

We broke fast on a pair of Sbarro breakfast calzones that tasted just a little rancid, and I broke in my new pants with a hot coffee stain from a cup possessed by a mischievous spirit. However, we arrived in plenty of time for the flight, since a minor mechanical problem delayed it by nearly an hour. On the flight to Miami, I sat next to a delightfully fey young couple. They were just leaving on a vacation to Cancun, followed immediately by a vacation to Maui. They were funny, extremely animated, and already pretty drunk.

The Miami airport is huge, and has no moving walkways or trains. We needed to walk all the way from one end (American) to the other (Avianca) to make our connection, of course. We stopped quickly to get Marta something to eat as we walked, as she had already started to tremble from low blood sugar. The American flight did not serve even peanuts on the four-hour flight. Neither of us took the opportunity to stop at a restroom; even so, we were the last to board the Avianca flight. We think they held it for us. The Airbus was nearly empty.

We enjoyed a magical flight over the Caribbean. I had an entire row to myself on the western side of the plane, and the sun shone bright and warm. Marta took the window on the eastern side, and we’d point out sights to each other. The waters lay calm and flat, marked with thin, dark streaks that seemed almost like wrinkles in the water. The horizon all around vanished into white mist that merged with distant clouds — without the long creases in the ocean below to mark our position, we might have been suspended without motion in an eternal late afternoon.

We passed clusters of Caribbean islands from time to time, and passed directly over Cuba. I don’t believe anyone can look down on Caribbean islands with their bright blue coves and grottoes without fantasizing about moving there and leaving the world behind forever.

I missed crossing the Colombian shoreline — by the time we reached South America, the clouds massed thick and richly textured, swirling as in pictures of Earth from space. However, the clouds cleared from time to time, and I could see the lush deep green below us. The sun had fallen low, so the mountain shadows could be seen, though only faintly through the thick air.

The approach to Medellin is spectacular. The city itself is high in the Andes, at about 7000 feet, and it is surrounded by lush green-clad mountains that make the Rockies look like foothills. Colorado boasts 14,000 foot peaks. The peaks of the Andes are more typically 17,000 or 18,000 feet, yet Colombia is pinned down on the north and west by coastlines. Medellin has one of those airports, like Hong Kong, that requires special piloting skills to approach. It also has a newer airport, where we arrived, that is not so difficult.

Our luggage did not arrive with us, but the airline did not leave us to wonder. An Avianca representative came searching for people whose luggage had not arrived, and took us to file the claim. They knew exactly where the luggage had ended up: it had not left Miami, because our incoming flight had been late, and would be on the next flight, to be delivered to us in the morning. 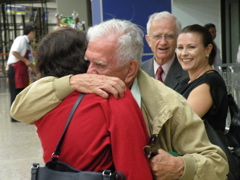 Papito, his brother Ricardo, Adrianna (Papito and Ricardo’s neice), and Jorges (one of Ricard’s sons) met us at the airport and then took us to eat and to tour the city at night.

Medellin at night reminded me in some ways of California summers at night. The roads are twisty and steep, the air balmy. Though we are at 7000 feet, the air has the soft, humid feel of the sea. 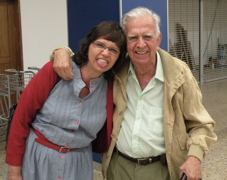 Medellin is situated in a valley that forms a bowl like a pair of cupped hands. The peaks to the east and to the west are steep and high, and the city climbs the slopes of the valley like a magical, luminescent lichen. Several steep hills sit within the bowl, including Cerro Nutibara, which is a combination park and museum that holds the oldest house in the city, nearly 300 years old. From any elevation in the city — and nearly every point seems elevated above something — the lights of the city float around us like a galaxy of stars. Even the skyscrapers do not tower above, as they do in so many cities, but instead float in space, at eye-level. If any city should be strung together with floating bridges and flying cars, this would be it.

They call it the City of Eternal Spring; it’s well-named. Nights plunge to a low of perhaps the mid-50’s, and days seldom rise above the mid-80’s, year-round. Breezes are gentle, and bird sing in the Eucalyptus trees. There are no mosquitos or other flying parasites at this altitude, so no screen or netting blocks the view from the windows and balconies. We slept with the window open last night, and the cool breeze soothed us. 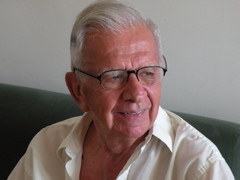 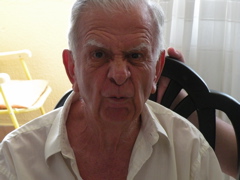 The restaurant last night was typical of Colombia — roofed, to keep off the rain, but open to the air. I had chorizo (smoked sausage), un plantano (fried plantain), una papa (a small baked potato), and una arepa (a flatbread made of corn). Everything has a different and delicious taste. They brought out a very spicy sauce, but the food itself was not spice-hot. The chorizo, in particular, tasted a bit like Polish sausage, but with a rich smoky flavor. Ricardo shared half his arepa, very different from mine, and I got a taste of Marta’s arepa, which I thought was the best of the three. All are corn flatbread, but are made with corn prepared differently. As a beverage I picked guanábana a leche — guanábana is a tropical fruit not available in our area, and it has a flavor that is somehow familiar and yet totally foreign. I have never been able to place the taste. 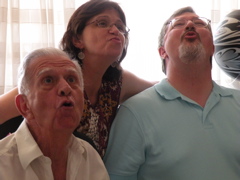 Today has dawned bright, warm, and dry. Adriana put us up for the night, and is cooking today: a lovely breakfast of eggs and arepas (different still), and is now cooking up a bit of a Colombian feast for us.