A long, tiring, and emotionally powerful day for Marta.

We started off with The Tour that our hostel (Recinto del Pensamiento) offers, which was enchanting. I still don’t completely understand the place. It sits on a land-grant of some sort, as a combination nature preserve, farm, ecological education center, and hostel with a spectacular outdoor reception center. At some point I should probably figure out what this place actually is. In the meantime, I’m simply going to call it an excellent place to stay.

The tour started with the herb gardens. We needed to catch a chairlift for the next part, so our herb herb tour was rushed. I was surprised to find that I knew most of them (such as mint and rosemary) as well as their basic medicinal properties. The only real surprise was cannabis, which is simply an herb here: it’s good (not surprisingly) for nausea and anxiety.

The chairlift took us up the mountain over the lush rainforest. It’s not a high lift, and in many places came quite close to the ground, though in others it took us across some pretty deep clefts with streams running at the bottom. 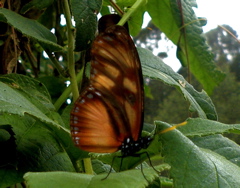 At the top, we toured the butterfly pavilion (papillón de mariposa). After that, we listened to a brief lecture on common birds of the area. Marta was interpreting for me, and she stopped at one point and said, “Oh! Oh!” On Tuesday through Friday they take birdwatching tours through the forest in very small groups, and Marta was rather upset about the fact that we are leaving here tomorrow (Monday). Had we been here longer, she’d have been on the sign-up sheet in a flash. Even without the tour, however, we saw some of the birds they mentioned later in the day. One, the Colombian equivalent of the turkey (protected now, since it has been hunted almost to extinction), is reputed to appear only before it rains, and sure enough, it rained.

We ended the tour with a walk back down through the rainforest, to view the orchids. 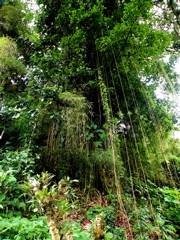 All forests possess a sacred quality, but there is something magical about the rainforest. You see prehistoric ferns set amidst very recent wildflowers. Birds are hard to spot, yet if you simply let your eyes take in the whole forest, there is constant windless movement as birds leap from branch-to-branch. The forest sounds preternaturally quiet, but only because our modern ear is tuned to the roar of machinery. Shift that perception and the rainforest is suddenly full of the chatter of living things, from birdcall to the sound of crickets and frogs, to the chuckle of running water. 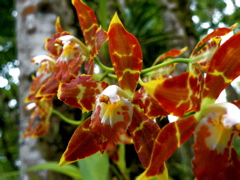 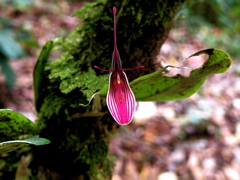 After the tour, I was soaked, though not by rain. In humid heat, I do just fine, but in humid chill, I sweat endlessly: which does nothing to my body temperature, of course, because the sweat can’t evaporate anyway. The climate here is quite chilly, but every bit as humid as a steam room. I don’t think I could live here comfortably.

After I changed shirts, we went for lunch, then soaked in the adjacent hot springs. This entire area is volcanic; one of the nearby peaks blew up as recently as 1985. The thermal waters contain a typical mix of volcanic minerals, but they are intensely salty to the taste, at least as salty as seawater: I’m more accustomed to the sulphur pools of Colorado, and I don’t recall the water tasting that salty. The soak relaxed me to a degree that made it difficult to keep my eyes open for the rest of the day.

Papito did not join us in the pool, but he was tired afterward, too. So we took him back to Javier’s apartment and then set out again, first to the cathedral.

Our interest in the cathedral bears some explanation. A friend of ours, Anne, recently completed a sabbatical pilgrimage — that’s what it turned into — in which she went looking for Black Madonnas of southern France and northern Spain. One of the historical facts about Catholic churches in Europe is that they are almost invariably located atop old Pagan sites of worship. One can argue that this was simply a religious continuation of the standard Roman practice of appropriating local religions for political purposes, but there is still the question of why the Pagan sites were there in the first place.

It turns out that there is a reasonably consistent answer: the location can be pretty easily dowsed. Anne’s training in dowsing has involved finding what she calls “water lines” and “fire lines.” The former involves different formations of water under the ground, and the latter involves fault lines in the earth. Both water and piezoelectric stresses in stone produce complex electrical fields, and the human body reacts to these, which is probably why dowsing works at all. Interestingly enough, the older Catholic churches, and the still-older Pagan sites they mark, are typically at an intersection of fire lines, water lines, or both. Simply paying close attention to your body as you approach any kind of marked “sacred space” makes it pretty easy to map the energy fields around the site.

Marta and I wanted to “body dowse” the cathedral.

Our impression: the cathedral in Manizales has a huge energy field that encompasses the entire hill that it sits atop. Marta and I are not skilled enough to know whether it is water, fire, or something else. Marta says that she’s heard there is a big underground lake under the cathedral. With all the volcanism in the mountains, I would guess there are some pretty potent fire lines as well. 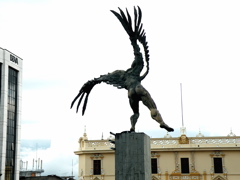 Interestingly enough, in Bolivar Square just outside the cathedral stands a dramatic sculpture of a traditional shaman shape-shifting into the form of a condor — the sculpture is called the Bolivar Condor. It forms an interesting contrast to the cathedral.

After a brief snack with coffee, we headed up to Chipre, the long park we visited yesterady. Unfortunately, the weather had by now turned overcast, alternating between fog and light rain, blocking the views on every side. In addition, the park was completely packed on this Sunday evening, so there was no place to park. We left without even getting out of the car. That’s when the excursion turned magical for Marta. 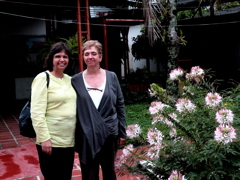 Marta and Nena decided to try to find their maternal grandfather’s finca (farm) just outside Manizales. They directed a very patient Javier here and there, searching for anything familiar to lead them to the almost-forgotten road. Manizales is as steep as San Francisco, and its roads plunge up and down with little regard to the limitations of automobiles. We eventually found what seemed to be the right road, and with each kilometer, Marta and Nena grew more excited. We reached the turn-off to the farm, and both Marta and Nena were astonished to find all its main features almost unchanged since they had been children in diapers. The farm had been granted to the Church at some point, and is now a place where children and young people come to learn some of the forgotten arts of farming, animal husbandry, sewing, weaving, and so forth. They met the nun in charge, who smiled and told them to explore to their hearts’ content. They learned that the place rents out to large parties like weddings; it would be perfect for a family reunion that Marta and Nena have been tossing around as an idea. They wandered the grounds remembering where they slept on visits, or where their loyal old farm dog had prevented the two of them from wandering through the gate onto the road, and how their grandmother, Santa Paula, had worked the gardens behind the house. 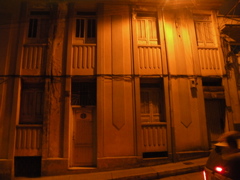 After finding the farm, we returned to Manizales and went up and down the streets again looking for their paternal grandmother’s house in the city. When we found it, they pointed to the door that had a counter-balanced staircase that could be lifted with one hand, allowing the horses to walk straight through the house to the stables in back. I could only pick up the few stories Marta shared in English: the Spanish throughout this was non-stop and impossibly rapid.

The rest of the evening was unremarkable, except for the ghastly lasagna Marta and Nena picked up in a supermarket to share for dinner. I did reasonably well — I limited myself to half a serving — but poor Marta’s stomach complained all night long.

We went to sleep with the sound of gentle rain on the roof.