Around this household, the word “Microsoft” is rarely (if ever) spoken. You will often hear “Microf.ck” or “Microsh.t” or other increasingly vile characterizations, usually shouted. But rarely will you hear “Microsoft” spoken in a calm, reasoned voice.

This morning, Marta came to me in tears. Yet Another Thing had gone wrong with her work computer, and she was frantic — facing deadlines, and the printer spooler had gone belly up. So off on the Yellow Brick Road we go: hit the Web, and sure enough, there’s a major problem with the Microcrap print spooler that requires that an update program be run. Except the update program is also buggy, so you have to get the upgrade to the update. Except that doesn’t really work, either. 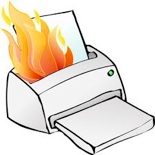 The spooler was working fine just yesterday. What happened last night? God alone knows. Maybe it was a virus protection update that now views the printer as a malignant virus trying to hack its way backward through the print spooler. Maybe Microshaft forced a “security update” to the operating system (despite the fact that we’ve turned that feature off) that screwed things up. Maybe it was just a bug lying in wait for the right moment to cause maximum emotional distress. Or maybe the printer just died.

This whole issue goes back to the 1980s, in the days of the TRS-80 and the Commodore computers. If you want to see a truly sweet system (almost two decades ahead of its time), look at the old Commodore Amiga. Dated now, of course — THREE decades after it came on the market. But it still kicked butt well into the late 1990’s, or even the early 2000’s.

Water under the bridge. Commodore went out of business a long, long time ago.

Even back in those early days, I remember a heated discussion with a co-worker.

People are like magpies — they like to collect shiny objects, and they don’t much care if it’s a plastic Christmas ball, or a sterling silver sculpture, or a chunk of toxic radium that will kill them and their little dog, too. My co-worker was exactly right. No one cared that 90% of the early IBM PC software was effectively a blank floppy disk. Or a virus. All that mattered was the amount of shelf space the applications covered, and the pizazz of the artwork on the packages.

Those of us who have to use the damned things have a different perspective, but we don’t matter, because we buy the computers, buy functional software, and then use them to death. That doesn’t produce much of a revenue stream for the companies that make them.

Microturd is successful precisely because the vaunted “marketplace” rewards producers of marginal crap, and generally punishes producers of quality. The underlying cause is, of course, human psychology, which has some interesting ways of misperceiving the world.

Next time you go to any store with a big parking lot that isn’t packed full, notice how people think in one dimension. The parking row right in front of the door will be full all the way to the end of the lot, perhaps a quarter mile walk from the door. The parking rows on either side will be empty halfway down the row. The parking rows on the outside of those will be practically empty. Now if you’re trying to save your feet, or beat the summer heat (or the winter sleet), it’s a lot shorter walk if you go two rows away from the door and park close. But people don’t do that: they pick the closest row, then go for the closest spot they can find in that row. One-dimensional thinking.

The same thing happens with computers. People are put off by the price tag on a new iMac, for instance. So was I. Then I found out what you GET for that little bit extra, and the difference is horrifying (if you’re a soon-to-be-former PC owner).

Yes, you can get a brand new PC in a big-box store for $500 — that’s finding the parking space in the row right in front of the door, at the far end of the lot. By the time you load it up to the point of being (nominally) useful, you’re at $2500, though now you’re in trouble, because a $500 computer barely has enough horsepower for

Mister Windows and your mandatory anti-virus software, and has nothing left over for all that “productivity” software you paid so dearly for. After a few months of pure pain, you shell out another $2000 for a reasonably fast box, (try to) reload all your software (paying for some upgrades), and maybe $5000 down the road, you have something that works.

Until the print spooler eats itself.

The iMac will set you back $1500 to $2000 right up front — that’s finding a parking spot two rows over, right next to the building. You take the iMac home, turn it on, and everything just works. Most additional software is free. The stuff you have to pay for is in the $1 to $100 range, and it’s elegant, useful, and intuitive, even for an old PC dog like me. Any software you pay more than $100 for is premium/professional software, and you’ll be able to do production-quality work with it.

The relative market share for Microglop and Apple is one of the clearest indictments of “the marketplace” I can even imagine.

I’ve got a little break in work coming up, and I’m going to spend some time completing my migration from Windows to Mac. After that, Microsoft can die.