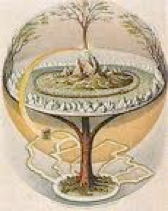 I learned of the Three Realms long before I encountered Druidry. As I remember, it was from Michael Harner’s book, Universal Shamanism. I’ve since read about many different traditions that have the same trinitarian division of the world.

Mid-world: the spiritual side of the Mundania where we all dodge cars and jiggle the handle on the toilet. I haven’t decided if Mid-world is the most accessible, or the least accessible of the three: the correct answer is probably, “Both.” It’s so similar to Mundania, often covered by it, yet familiar and easily accessible if you make the attempt.

My initiation to the Bardic path took place in the Snowy Range in Wyoming, near where my daughter’s ashes are scattered. We’d driven up to camp early in July, just before the weekend of the Fourth, and many of the campsites were still closed and snowbound. But one of the lower sites was open.

I climbed a steep hill that rose from the parking area, where I encountered a pair of small trees that blocked my way. Two knots in the trunks gazed at me. I watched them turn to look me over. It was bizarre: they were small knots with fresh, stubby new growth, and at first I thought that bugs must have nested in the new sap behind them and caused them to move. I had no idea what bugs might do such a thing, or if it was even possible, but it was the first thought that popped into my mind. I watched them closely, and realized they weren’t really moving: it was an optical illusion caused by sun and breeze and dappled, shifting light. Then I watched them turn again. I tried to fix my eyes on them, to find some reference point that would tell me whether they were really moving, or merely seeming to move.

I failed in that effort: they did not move, but they moved. Searching. Watching. Guarding.

I asked permission to pass, and when I felt no resistance, I proceeded into a deep bowl that contained a lodgepole pine forest. Years of needlefall covered the ground in dark gray and rust. The trees stood tall, tall and thin — a high cathedral filled with muted light that slanted into the grove from the morning sky to the east.

Still. No breath of air moving. Then faintly, the soft sussuration of wind as it passed by, high above. No air stirred below, where I sat.

We can find these sacred, mystical places everywhere, because Mid-world is all around us. Like a Magic Eye picture, it is a matter of refocusing our eyes and our intuitions, and then it appears suddenly. It has always been there — all that changes is our awareness.

The Underworld is also easily accessible, though entry is usually more formal for me. Harner speaks of entering through holes in the earth beneath trees, or through caves.

The shift of perception is different. I often find it difficult to hold the tree steady in my mind so that I can find my way through the roots, or to imagine the cave clearly. It gets easier after that, however, because the Underworld itself has its own power and life, and builds itself around me as it draws me in.

The Underworld lives deep within our minds, in a place where language is replaced by symbols, and it can be difficult to interpret those symbols. I have encountered things that have puzzled me. Some have frightened me. But we have power there, as well, which may be the deepest danger of the Underworld. It is a place where we can do deep healing or, if we are so inclined, deep harm to ourselves.

In one of my earliest visits, I found myself in a thick forest. I carried a sword, a symbol of power, and wore a heavy ring, a symbol of authority. I heard a sharp scream in the distance, and went to investigate.

I came upon a frightened woman and a hideous beast that threatened and snapped at her. I interposed myself between her and the beast, and it backed off. Then it rushed me.

You might ask why I didn’t just kill it. It is generally inadvisable to kill anything in the Underworld. It is, after all, deep within our own minds, and most things we encounter there are parts of ourselves. Killing any creature in the underworld is a bit like performing surgery on a diseased liver: you should be certain of what you are doing. This was one of my first visits, and I was not inclined to lay about with a scalpel — or a sword.

Even though I was not trying to kill the creature, I could see that I was hurting it, and thereby hurting myself. Then I remembered the ring. A magic ring, a ring of power and authority. This is my own mind, I thought. I am master here. That’s what the ring means.

So I showed the creature the ring, tamed it and bent it to my will. I made it follow me deeper into the forest, until we came to a pool filled with clear water, lit from within by an emerald green light. Green for healing. The beast and I entered the water together, and though the pool was only a few yards across, it was deep and grew broader as we descended. The creature changed. It became a beautiful woman with dark, flowing hair, and she nodded to me with a smile and swam away.

Some profound healing began within me that day. I could try to tease out the psychoanalytic or spiritual “meaning” of the symbols, but the meaning isn’t that important. What was important was the doing.

The Upper World I do not know very well.

One environ I do know a little about is where I go for musical inspiration. I have occasionally visited this place in my dreams, as I sleep. I suspect that is where I go when I am lost in the process of composing.

In one of my first dreams, I heard an organ symphony. I was somewhere toward the back-center of the orchestra, perhaps in the second fiddles, and a huge pipe organ dominated the front of the room. Because the room was layered in tiers, like a band rehearsal room — though it was more like a performance hall designed so that the audience was the orchestra — I could look down on the entire group. The music was powerful and moving, original and incredibly beautiful. Then, as the organ began an upward-moving arpeggio in thirds toward a climax, I felt myself start to wake. I tried to hang on to the music, but I only succeeded in missing the climax and triggering a repeat of the arpeggio, an octave higher. The instruments blew away like leaves in an autumn wind, the harmonies and structures evaporated like morning fog. As I opened my eyes, all I could hear was that arpeggio in the organ, climbing irrelevantly, repetitively, mechanically into a third octave. I wept — I literally wept — with frustration.

I have heard fragments of a violin concerto, in the style of Prokoffiev. A simple but moving church hymn, sung by Russian basses. Fragments of a (second) piano concerto. A clear, pure soprano solo voice singing an infinitely sad melody in duet with a French horn, above a fabric of gentle strings.

I think, when my compositions are at their very best, they contain an echo of the music that flows so effortlessly in this portion of the Upper World.