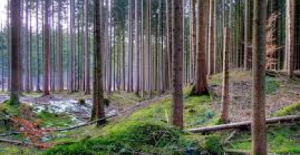 Before I started writing on this topic, I needed to refresh my memory of exactly what a Nemeton was. I consulted Wikipedia, and found some details that changed the entire course of this entry.

My nom de plume is Themon, which was given to me by one of our Druidic Circle members as an anagram (of sorts) on my real surname, which is Nemeth. My grandparents on my father’s side were immigrants from Hungary — both came from Budapest. Beyond that, I know almost nothing of my father’s heritage.

When I was in graduate school, I was introduced to a Czech refugee who had just escaped from the then-Soviet country. My name was spoken as he shook my hand, and he stopped shaking it — he stood there motionless with my hand in his — and an incredulous grin spread across his face.

“Did you say … Nemet?” he asked, in disbelief. I nodded and his grin grew wider. He finished shaking my hand, and then we went in to dinner. I was very puzzled, and he later explained to me — somewhat apologetically — that “Nemet” was something Czech cab drivers would yell at each other, not in a friendly way. It was an epithet, somewhat on par with “Asshat.”

I learned still later that while it is an epithet in the Czech tongue, in Hungarian it is one of the most common surnames in the Budapest phone book, and is generally assumed to mean “German.” Ethnic identity and rivalry being what it is, it was suddenly clear how my surname could  be commonplace and respectable in one country, an epithet in another, and its meaning apply to yet a third country.

If you search Wikipedia for “nemeton,” you will immediately find reference to a particular Germanic tribe named the Nemetes, who lived in southwestern Germany near Speyer, just south of Mannheim. The article mentions as far south as Lake Constance, also known as the Bodensee, so this would have placed the Nemetes all through the Black Forest region of Germany, the setting for many of the Tales of the Brothers Grimm.

In 2002, I visited US friends who had gone to Tübingen to work for two years, and we took a road trip to the Bodensee. As we drove through the countryside on the German-Swiss border near Shaffhausen, I was nearly overwhelmed with a profound sense of … homecoming. At the time, I thought it was perhaps merely because it is very beautiful country.

Now I wonder if perhaps my ancestors once lived near the shores of the Bodensee, just south of the fabled German Black Forest.