Day-to-day practice sounds to me a lot like “daily practice,” which reminds me of doing scales on the piano as a child. Boring and frustrating. As an adult, where no one but I, myself, can force me to sit in front of the keyboard and rehearse my fingers at quarter-speed through a Chopin étude — well, it happens, but only in sporadic fits.

The hang-up for me is that “day-to-day” phrase. Some people are really into repetition. My cycles are much larger, and I’m goal-oriented and easily bored. I do projects. 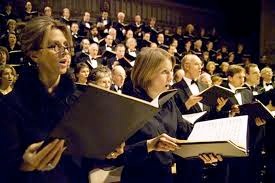 A recent project, for instance, was writing a Druidic Mass. I started it a little less than a year ago, about a month after getting a new iMac and music software for my birthday. The project took several months to complete, then several more months to polish. At Beltania I heard a choir perform, summoned up my courage, and approached the director with the work. That resulted in another month or so of rewrites, creating a piano reduction for rehearsal, and — ugh — editing. Editing scores is painful. Unlike prose, there are markings on scores. Billions of them, it seems. Bowings (where relevant) for strings, breath marks (where relevant) for the winds, phrasing, dynamics, tempos. But that project is now effectively finished, rehearsals are starting, and a first performance is scheduled for January 7 of next year.

I approach this “30 Days of Druidry” as another project, rather than as a daily practice. I cannot imagine continuing with a daily blog after it’s done. I won’t have the time, for one thing. I’m on a three-month work furlough, and when that ends, I’ll have little time for this sort of writing.

I don’t have a personal altar. I’ve tried creating one, and that is always fun. But then it sits and collects neglect and dust until I need the space for some other project. I don’t talk with the gods on a daily basis — I don’t even talk with my friends on a daily basis: some of them I only see once a year, if then. I used to journal pretty regularly, but I’ve found that I tend to journal in direct proportion to my level of unhappiness with life. I’m pretty happy with life right now — my current journal is only two-thirds full, and most of the entries are from 2003 and the first half of 2004.

Should civilization collapse and we all go back to farming and herding goats, I’ll still be looking at it as a series of year-long projects. Taking the goats through their annual birthing cycles. Plant, tend, and harvest. I’ll be bored by the end of the second year, and will want to tweak the cycle. I’ll add bees and make mead. Or something.

I don’t have a daily Druidic practice. Given my patterns of life, I can’t imagine that I’ll ever have one.