Of the eight solar rituals celebrated by modern Druids, four are classified as “Fire Festivals,” while the others are called “Sun Festivals.”

The timing of the Sun Festivals coincides with solar astronomical events: the two solstices and the two equinoxes. The fire festivals fall almost exactly halfway between these dates, but they are not coordinated directly with astronomical events, but instead, agricultural and pastoral rhythms.

Imbolc, which falls around Febrary 2nd, is also called “Lambing Day.” It is, as I understand it, the time of year that ewes begin to lactate, anticipating the birth of lambs a little later in the spring.

Beltaine, which falls around May 2nd, is the spring fertility rite, a time to request of the spirits and the gods a fruitful summer, and strong, healthy children.

Lugnassadh, which falls around August 2nd, is the end-of-summer and first harvest, and traditional celebrations involve lots of food, games, and competitions.

Samhuinn, or Samhain, falls around November 2nd, and is the Last Harvest festival, and a final putting-up of the winter store. It was by tradition a three-day feast, beginning in late October.

As a modern, urban Pagan, I have never found these four Fire Festivals to have much personal immediacy or relevance. My food appears magically in the supermarket, and includes exotica like Costa Rican mangoes and Chilean grapes in the dead of winter.

Matters are made even more confusing by the local climate, which is nothing at all like the climate of Great Britain. 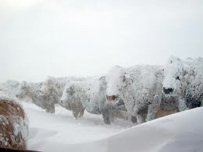 Here we see Colorado in February, weather that typically drags into March or even April. February is when we get our cold snaps, where the temperature plunges to 20 or 30 degrees below zero. As I write tonight, it’s reasonably warm — 32 degrees, right at freezing — but the wind has been roaring through the bare tree branches all day.

The images of Imolc in Great Britain are more appropriate to our Beltaine, shown above. By May, we are starting to see warm weather on a consistent basis, though Beltaine is typically a wet celebration, with cold rain or even snow. There is usually a chilly season in late May through early June, just before the summer heat sets in by mid-June. 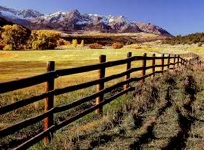 By Lugnassadh, summer is already finished and the first cool weather is setting in. When I’ve celebrated the solstice in the mountains, it has sometimes been warm enough to sleep outside, under the stars. By August, when we gather for Dragonfest, you need a sleeping bag and your poly-wool underwear. And maybe an extra blanket. 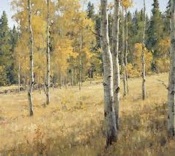 In late October, the cold has returned: the traditional Halloween candy-crawl with the kids is often canceled due to the first snow of the season.

Although we celebrate the traditional British versions of the OBOD fire festivals in our Druidic circle, we have been slowly adapting them to our own rhythms of nature. We speak of the bison, not the bear of the North. In the West we have the trout, not the salmon. The South is the domain of the elk, rather than the stag. Only the East is unchanged: here we also have the hawk, and the eagle as well.

Our trees depart even further from the British norm. There are no mighty oaks here — only scrub oak, and most of that is further south, toward Texas. Our mightiest trees are the blue spruce in the mountains, and the cottonwood in the lowlands, both of which are very different from the oak. One of our most magical trees is the aspen, which has no real match in the British Isles. Or the mysterious lodgepole pine, the grove in which I initiated my journey into the Bardic path years ago.

We have only barely begun this adaptation, but it seems right to me that as people of the land, of the earth, who claim to be at home in nature, we should adapt to the earth as it is — not as someone has remembered it in a story from a thousand years ago in a land nearly halfway around the world. It is good to remember that world. But remembering should not stand in the way of fully celebrating this one.