Of the eight solar festivals celebrated by modern Druids, the four Solar Festivals or Sun Festivals are the most easily defined. They are based on specific astronomical events which occur predictably and measurably every year: the two solstices and the two equinoxes.

Practical daily timekeeping is most easily measured by the sun. Every day — except at extreme latitudes — the sun rises and sets without fail. It may be obscured by clouds, but the sun is so bright that even under heavy cloud cover, you can visibly tell day from night.

Our custom of measuring the day from noon, or its opposite of midnight, is a relatively modern phenomenon. In Renaissance Italy, the old clocks — such as the clock in Saint Mark’s Plaza — are marked with twenty-four hours, rather than twelve. Less well-known is that the clock measured the hours according to the hora italica in which hour twenty-four occurs at sunset, rather than midnight. The Druidic Celts measured the day from sunset, as did ancient and traditional modern Jews.

For longer periods, the moon has always been the obvious timekeeper. The period from one new moon to the next is approximately 29.5 days, varying by a few days from month to month. Most early civilizations and indigenous peoples measure the year by moons.

But all advanced civilizations — the Mayans, the Chinese, the Sumerians, and (of course) the Druidic Celts — developed very sophisticated measures of time that revealed inconsistencies in the motions of the heavenly bodies. The time from sunrise to sunrise grows shorter through the spring months, and then grows longer through the autumn months. The “inconstant” moon does not pass from new to full to new in exactly the same amount of time every month.

These cultures all discovered that the time from noon to noon — or from midnight to midnight — is the same every single day of the year, without fail. Season to season, year to year, generation to generation.

In the same way, they discovered that despite the inconstant wanderings of the moon, or the weaving dance of those “wanderers” or “planetai” like Mars and Venus, or the slow drift of the stars across the night sky through the seasons and decades, a steady heartbeat existed — the solstices and the equinoxes.

The summer solstice is the “longest day” of the year at any point on the earth other than exactly on the equator. The winter solstice is the “shortest day.” The equinoxes occur exactly halfway between the solstices, in spring and autumn, and mark the point at which day and night are (approximately) equal. It is always exactly the same period of time from summer solstice to summer solstice — 365.25 days, a magical number that most modern schoolchildren learn, but which, in more ancient times, only the most educated members of high civilizations knew.

It takes precise measurements indeed to pinpoint the solstices and equinoxes, the more precise as you venture closer to the equator, which is why their measurement and celebration tends to be considered one of the markers of an “advanced” civilization.

Today we have built upon this ancient knowledge to the point that we’ve reduced the prediction of these solar events to a fairly simple formula that I’ve used to place these events on the Treehenge website calendar. Those calculations are accurate to the nearest minute, and should be good for at least another thousand years. More complex calculations that take the small wobbles of the earth’s axis into account can reduce the error to a matter of seconds, or even fractions of a second. 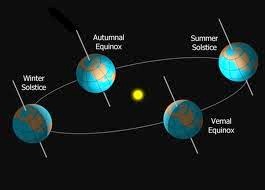 This solar pendulum of seasons is driven by a very simple thing: the tilt of the earth’s axis relative to the circle the earth traces around the sun.

This seems such a simple and elegant concept, but even four centuries ago, no one in Europe wanted to believe that the Earth was an unmoored object that moved. The earth was clearly stable, and fixed, and the moon and stars and planets and the sun moved around it. Many great minds pondered the bizarrely regular, yet inexplicable motions of these heavenly bodies.

But while they could not explain these motions, they could certainly observe and record them, especially with the help of fixed earthly structures that let them measure exactly how these objects moved. The Mayans constructed towers along mountain ridges. The Chinese built large towers that could be used to line up and sight stars, and elaborate water-filled pools that could be used to precisely measure the lengths of shadows cast by the sun. And — of course — the paleolithic inhabitants of Europe had their great stone circles.

Another peculiarity of spinning objects is that the spinning axis doesn’t point exactly toward a fixed point in space. When a force pulls on it — such as the gravity of the sun, which keeps the earth tethered rather than allowing it to float off into space — the axis of rotation wobbles. Anyone who has ever spun a top and watched gravity pull on it as it spins has watched it wobble, slowly at first and then faster as it slows down.

The Earth is very large and is spinning — in astronomical terms — at a pretty good clip, so its wobble is very, very slow. It takes about 26,000 years to wobble just once. As it wobbles, the constellations of stars seen at the spring equinox appear to slowly turn through the heavens.

In meditating on both the Sun and the Fire rites of Druidry, what impresses me tonight is how the Sun Rites unify us, while the Fire Rites require us to acknowledge our differences.

I explored briefly yesterday how different our Colorado seasons are from the British seasons — how in many ways the agricultural and pastoral celebrations of old Europe make little sense to us in our high-plains desert at the edge of the mountains — the uniqueness of our wildlife, our trees, our planting and harvesting seasons. There is no difference in value, no “standard” to strive toward — only differences to be celebrated.

The Sun Rites are based on something common to everyone on the Earth. We experience these differently by latitude, but we still experience them. The Australians have Summer Solstice while we have Winter Solstice; for those north of the Arctic Circle, the sun never rises during the Winter Solstice, and never sets in the Summer; for those near the equator, the difference is only noticeable in that the north or south side of the house gets more or less light. But those who study the sun and the stars, no matter where they are, find the same unchanging constants in the midst of variation.