The term “European Socialism” keeps turning up in the Rhetoric of the Right, and they seem to expect it to make my hair curl and give itself highlights.

I’ll confess that I don’t know a whole lot about European Socialism, in the sense of what it is really like to live there. So when the Right says that it’s “horrible” and “debilitating” and that it undercuts “freedom,” I can’t really call them liars. At least not personally. I simply don’t know enough about it.

But what I do know is that they are telling untruths when they say it is funded by “massive taxation.” I know this because I sat down and did the math. The truth is that Americans pay more in taxes than the European Socialists do.

Let me repeat that. American taxation is higher than European taxation.

I picked the Netherlands (where the Dutch live), a nation with lots of individual freedoms, its own military, and which is also one of the most “socialized” of the European nations. Their tax-paid benefits include:

I did this calculation back in 2009, based on 2008 tax rates. That was at the end of Saint GW Bush’s radical tax-cutting spree, so US taxes were as low as they’d been in a long time, and health-care insurance was still reasonably affordable because the insurance companies could still rake in profits by selling it only to people who didn’t need it. 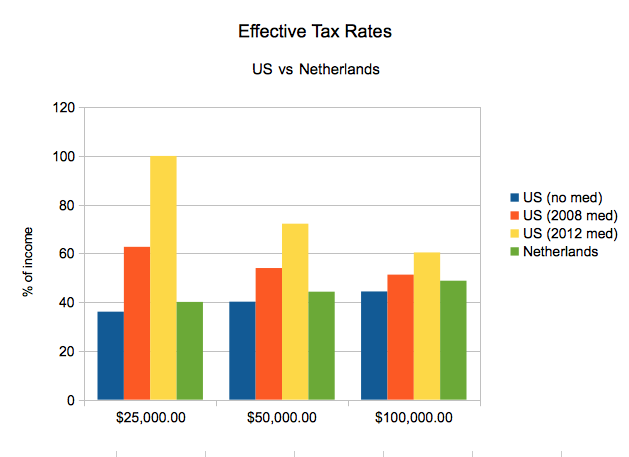 If we don’t include any healthcare costs in the US, we can see that taxation in this European cradle-to-grave Socialist State is a whopping 4% higher than in the US, across all tax brackets (blue versus green).

When we add in health insurance as it existed in 2008, the US effective taxation becomes regressive rather than progressive: it takes more away from the poor than the rich (orange — note how it decreases as income rises). Note that it is higher than the Dutch rate in all income brackets (green).

When I update those health insurance numbers to what they have soared to under the “Affordable” Care Act of 2008, health care actually becomes completely unaffordable for low-income people, and spikes even the higher income brackets (yellow).

Of course, regressive taxation by definition spares the wealthy. So at income-levels of $1M/year or more (not shown) where paying for health care comes out of the petty cash box you keep by the garage door (as does college tuition for your kids), we can get back to claiming that European Socialism has “massive taxes” of an additional 4% for the ultra-wealthy.

Next time you hear some conservative Limbaugh-mouth ranting about the “high cost of European Socialism,” point them over here. And if they don’t like my numbers, they can refigure them for themselves. Assuming they can add.

Here are the hard numbers.

US federal income taxes are mandatory; 2008 tax tables were used.

US FICA taxes pay for Social Security and Medicare, and are mandatory. Individual and employer contributions of 7.65% were used, for a total FICA tax of 15.3%.

US state income taxes vary from zero (Wyoming) to nearly ten percent (California), and are mandatory. I chose the approximate Colorado rate of 5% (actual 2008 rate was 4.65%).

US property taxes pay for public primary and secondary education. They are loosely related to income, in that people with higher income tend to live in more expensive properties, and vary from below half a percent (Louisiana) to nearly seven percent (New Jersey). I chose the approximate Colorado rate of 2%.

US unemployment insurance is optional for small companies; unemployment benefits are only available to employees of companies that pay premiums. Premiums vary by state, from negligible (Georgia) to $500/year/employee (Oregon). I chose the approximate Colorado rate of $110/year/employee.

US health insurance rates for 2008 were based on my own business-group-of-one rates in Colorado at age 52, as advised by my health insurance broker as the best moderate coverage for the lowest cost. This is comparable to the reported national average of $6000/year.

US health insurance rates for 2012 were based on half my own business-group-of-one rates in Colorado for my wife and I (family coverage), which is actually somewhat lower than what I would pay for individual coverage.

Dutch national income tax pays for social security, public education, and unemployment insurance, as well as other benefits, and is mandatory; 2007 tax tables were used.

Dutch national health insurance tax is a supplementary tax to offset the costs of health care, and is mandatory. I used the higher value of 6.5% for normal income.

I omitted post-secondary educational costs and benefits. Education is free (government paid) in The Netherlands, but not everyone gets into college or trade school — you have to demonstrate some aptitude to get into advanced education. So I’ve omitted it, which makes the Dutch figures look higher (or the US tax figures look lower).

The practical difference is that Dutch students who are accepted for post-secondary education graduate without debt and are free to take a job and begin earning their own living wage immediately; US students who choose to go to college graduate with a debt roughly the size of a home mortgage and are indentured to the banks, often for decades.