I’m currently reading a fascinating book on crop circles (Secrets in the Fields, by Freddy Silva) that I picked up in Isis Books and Gifts in Denver yesterday.

I remember my first real introduction to crop circles. The year was 1999, late in the year — October or November. I’d just started dating a woman I’d met on match.com, and she wanted me to come with her to a talk. She was obsessed with the Y2K bug and the end of civilization as we knew it. A lot of people were.

I wasn’t very worried. I worked in the computer industry, and I knew a whole lot of money had already gone into certifying computers and software as “Y2K compliant.” I figured that if the bug shut down computer systems they way the alarmists had predicted, it would pretty much destroy the privileged classes along with civilization, and I knew they weren’t going to stand for that: ergo, enough money had been spent to fix the problem — and if not, more money would be spent, until the problem went away.

I had a lot more blind confidence in the wealthy and the powerful back then. I’ve since come to understand that the very rich really aren’t very bright, and that when the end comes, chances are it will actually be their fault: a collective act of inbred stupidity. But this was 1999 and I wasn’t worried, and my girlfriend was, and she wanted to go to a Y2K talk. So I went.

The main attraction was a fellow selling Y2K Tincture of Sludge. He’d bottled some nostrum he’d taken from a mudhole somewhere on his property, which he claimed was full of “colloidal silver” and a bunch of other miraculous health-inducing minerals: something we’d all need as civilization fell around us and the antibiotics and hospitals and IV drips all went away. He claimed to use the stuff himself, every day, and had never been sick a day since he’d started.

Frankly, he didn’t look that healthy to me. He moved like an old man, though he seemed to be only in his early 40’s, and his skin was starting to take on the characteristic gray-blue color of chronic silver poisoning. But I sat quietly through his attempt to hypnotize the crowd and sell them his muddy water at $40 a pint.

It was a classic snake-oil pitch. I’d never seen one live before. He wasn’t very good at it. I’d been raised on Professor Harold Hill from The Music Man, someone full of charm and wit and irresistible salesmanship. This guy was twitchy and was selling nothing but fear of The End, all fire and brimstone without the fire, and he was a major disappointment.

HOWEVER, there had been a warm-up act before him that was a lot more interesting. I don’t recall the speaker’s name, now, but he was a “crop circle researcher.”

I’d heard of crop circles, of course, just as I’d heard of Bigfoot and UFO abductions. My father had a couple of UFO books in his collection that were written back in the 1950’s, and during the long, hot, boring summers in Cheyenne in the 1960’s, I’d peruse those books and dream of adventures in outer space. I’d seen the blurry photographs of flattened weeds allegedly left by UFO landings. I assumed that’s what we’d be hearing about. Wheee. I sat back and prepared to fight off sleep.

The speaker surprised me by starting off with a pretty good joke about crop circle researchers, followed by a short lecture on fractals, Sierpinski manifolds, and Koch curves. It wasn’t really a math lecture — it was well-pitched to the audience that had come to hear a snake-oil salesman sell mud — but he actually seemed to know what he was talking about. He went quickly through the basic construction of a Koch snowflake, one of the many kinds of mathematical shapes known as “fractals,” and then he threw a picture up on the screen with his overhead projector.

At first, I was appalled at the poor quality of the picture. Jeez, I thought, can’t this guy afford a decent PC? How did he make this thing, anyway? It has lousy resolution, and it has all these funny raster lines running through it at a bizarre angle. It’s also squashed, like he tried to simulate a perspective angle on it….

Then I realized what I was looking at, and my mouth dropped open.

It was an aerial photograph of a farmer’s field. The “raster lines” were tractor furrows. I was looking at a Koch snowflake the size of a football field, etched in grain: the crop circle found near Silbury Hill in Wiltshire County, England, in July of 1997.

The picture on the overhead was a faded copy of a copy, nothing at all like the picture shown above. Even so, it floored me. This was obviously not a natural artifact left by a whirlwind or a pack of oversexed weasels. If it was a manmade hoax, it was in a whole different class of hoax than the cheap faked photos of UFOs from the 1950’s.

I was well and truly hooked. I still am.

Unlike either the debunkers or the true believers, I have no fixed opinions on how these come about, other than that they are obviously not “natural” phenomena — they aren’t made by wind or “plasma vortices,” which were two of the early explanations back in the 1980’s. They appear at first glance to involve pure magic in their creation — as do the illusions of David Copperfield.

For instance, the famous “Julia Set” circle that appeared near Stonehenge in July of 1996 was allegedly created within about twenty minutes, according to one eyewitness who watched its creation from the road — consistent with independent testimony from an amateur photographer who flew over the area in a private plane and saw nothing forty-five minutes before the circle had begun to back up traffic on the highway, as well as one of the guards at Stonehenge, who had a fifteen-minute beat around the site.

Copperfield could have done that. Of course, he didn’t — when he makes an elephant disappear, he gets first billing, not the elephant. Ta-da! There was no “ta-da!” here, so obviously, no Copperfield.

On the other hand, there’s an anonymous interview on the web with someone who claims to know the three people who created the Julia Set circle, using standard board and rope stalk-stomping methods. He says that it was actually created in the wee hours of the morning of the day it “appeared,” and that no one noticed it until six in the evening — which isn’t as implausible as it sounds, given that visibility has a lot to do with lighting, and that people really aren’t very observant. It could well be that the setting sun is what made the circle “suddenly visible” from the highway and from Stonehenge. And maybe the photographer was focused on Stonehenge, and never even glanced at the field across the highway from it.

However, despite the snide debunking that surrounds the subject — debunkers generally bore me, as their science is usually as bad as that of the true believers, if not worse — there is one obvious mystery to the circles: it has been going on for at least four centuries, and perhaps a whole lot longer.

I can easily see modern-day “copycat guerilla artists” going nuts in a huge fad of cereal-based art: we have the free time on our hands, the aerial photography, the instant communications. The idea of conceptual art on every possible surface is chic — one thinks of Christo wrapping New York’s Central Park in silk. Our modern art celebrates nihilism and the absurd. So an entire underground conspiracy of black-clad Ninja Artists stomping around in grain fields at night, year after year, is not at all implausible. I’ve seen stranger things with my own eyes at Burning Man.

I have a much harder time understanding why people would do such a thing in the 1700’s, much less the 1500’s, absent some widely-known tradition like harvest races and the corn hag. Even those traditions die out or change over time. Yet the “mowing devil” seems to be perennial. Why? That’s a true mystery.

Perhaps there’s a set of simple crop circles that are created by natural forces, going back into prehistory, that account for the “mowing devil” of old; perhaps the rash of increasingly complex forms since the late 1970’s has all been the work of bored artists, peppered with a few natural circles that are lost in all the hoopla. That implies that this fad will die out in time, and we’ll return to the simpler “mowing devil” circles that occur naturally.

Whatever the explanation, the circles themselves remain beautiful art, and the very best of the artists are quite skilled. Almost skilled enough to be considered magicians. 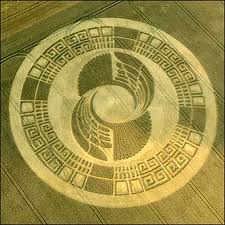