Saturday we had a final farewell party in the house that has been such a wonderful place to entertain. Old friends dropped by, and we tried to drink up the liquor cabinet, and failed. I opened some bottles of mead that have been sitting around for fifteen years, including the Mystery Mead, labeled 2000. Only one person guessed the flavor: garlic. Yes, a garlic mead. I don’t think it was anyone’s favorite, but it wasn’t bad, and by the end of the party the bottle was empty.

Sunday and Monday were final clean-up and pack days, and it was a bit overbooked, but we got most everything finished. I still have to finish mowing: the rain last week kept me from getting ahead of it, and it looks terrible. Marta is intent on leaving the new owners with a clean move-in: one of the many things I love about her.

Monday — yesterday — ended with us packing the cars and hitching our little Conestoga — maybe we should rename her the Conistogita — as our temporary home while the Packer Ants descend on the house.

We decided to move out early, to save stress on the animals. When we moved to the house in 2012, it was just a cross-town move, and we put the cats in the new place and locked them in the upstairs bathrooms with litter boxes and food. All the thumping and bumping in the new environment left them decidedly unhappy; there was a lot of fur on the carpet when we finally let them out to explore their new home.

When we had the roof replaced after the huge hailstorm last summer and the entire house became the inside of a djembe with a thousand insane drummers on the roof, Marta packed up and left with the animals in our Casita. That’s when she found the KOA camground north of Fort Collins. Surprisingly, after a round of largely symbolic growling, both cats settled down and rather liked it.

That’s what we’re doing this time, too.

We left the house to the sight of a gorgeous orange sky behind the foothills, and arrived at the KOA just as the stars were coming out in an indigo sky. As usual, the propane furnace didn’t work, but we were toasty under our comforter, and the animals had their own little warm nests.

Today promises to be a lazy day for me. We need at least one person at the house to supervise the packing (required by the moving company), and one person here to supervise the animals. If we took the cats out a lot, we could probably leave them in the Casita for extended periods. But our mantra for this move has been “NO STRESS,” and that includes feeling stressed about whether the animals are stressed.

Though supervising the packing is a lot more work than pet-sitting, Marta said she’d feel better if she was on top of the movers. Frankly, so would I.

It’s about ten in the morning, the animals are all catching a morning nap, and I’m blogging away. Birds are chirping outside, and the chill is finally just starting to leave the air.

This is, by far, the nicest KOA I’ve ever encountered. Aside from the spacious and well-kept grounds, they have things like this: 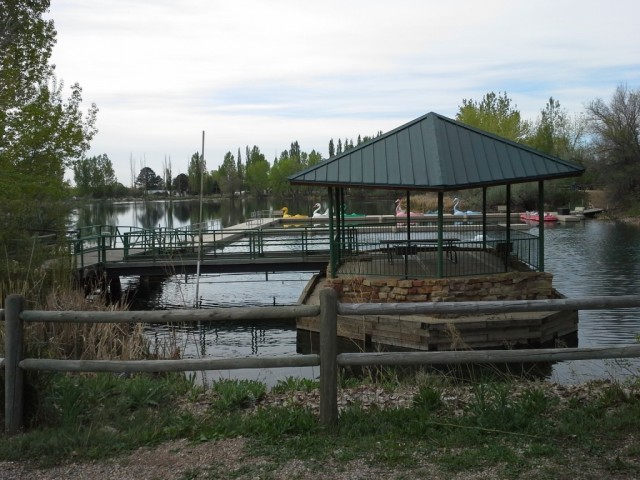 I can’t help thinking about travelers in other times and places. At no time in the past — and perhaps no time in the future — has a move like this been so easy, and painless.

We’re moving 1200 miles, give or take. Horse-drawn wagons could make about twenty miles a day under ideal circumstances, and only ten (or less) otherwise. At ten miles a day, this trip would take 120 days, or four months. Heading out today, we could reasonably hope to arrive by mid-September, “God willing and the creek don’t rise,” as they say. But ordinary little things like broken wagon wheels, lame horses, local flooding, brush fires, or just good, old-fashioned rain-soaked mud could easily push that out a month, to mid-October, and now we’re flirting with winter. A bit of truly bad luck, or a bad (or misread) map, and we could find ourselves holed up for the winter, far from our destination, in some truly inhospitable place.

We’d have left most of our belongings behind. We would have only necessities with us, or perhaps some inconveniently large heirloom we absolutely refused to part with, for which we would have to sacrifice other comforts in order to accommodate. We’d be traveling in company: we’d need spotters, trackers, and a gunman or two in case we encountered bandits. We’d have some kind of constitution or compact for the traveling group, which would spell out rights and responsibilities, and tensions on the road could turn deadly.

Our stresses seem trival to non-existent in comparison. Other people are packing virtually all of our belongings, down to the paper clips, and it will all arrive, almost magically, within days of our arrival. Our own journey will take two not-very-long days: we plan to leave early Saturday morning, and arrive late Sunday evening, those 1200 miles vanishing under our wheels like a swift bird’s dream. We will eat well on the road, relax in the evenings, sleep soundly during our one night on the road, and will be surrounded on our trip by an enormous infrastructure that is designed to facilitate rapid, safe, convenient travel.

In addition, Marta and I are in constant communication though we are several miles apart at the moment, and she can ask whether I want my regular shoes packed, or with us in the car. I’m blogging on a laptop, through a local hotspot built into an Android pad that uses the cell phone network to get to the Internet.