I thought I’d lead with the picture I just snapped outside our vacation rental a few moments ago. This is the view we’ve been waking up to every morning for the last two weeks. There is a lot of birdsong at the moment, but otherwise, it is very quiet. The other day, we startled a deer in the tall grass, walking along the road down to the little pond just below us: the deer was less than ten feet away from us when it leaped up and bounded away. Frogs and crickets grace the evenings.

We’re coming to the end of this interlude, and are both looking forward to settling into our new home on Monday.

As vacations go, this one has been mixed. We are living out of suitcases, which is normal for a vacation, but we’ve got two cars packed with junk we’d never take on a vacation, such as our work computer equipment. Which we’ve both been using, since this has been a working vacation.

It’s been doubly busy for me, since — in addition to an elevated degree of chaos at work that has demanded long days — I’ve also been in the process of changing jobs, which is now far enough along I can talk about it. So in addition to filling out rental agreements and setting up bank accounts for our new home, I’ve been filling out I-9 forms and reading new employment contracts.

Still, the environment has been idyllic.

Stephen and Jessye joined us late Saturday afternoon, and stayed over until Sunday. It was a sweet and relaxed time.

On Monday, we had the Memorial Day parade. I remember going to the Cheyenne Frontier Days’ Parade when I was a little kid, and it was quite the big deal. It was very hard to find a place to watch: the streets were lined with people, some of whom showed up hours in advance to get good seats, and for a child, your choice was to worm your way to the curb, or spend the parade watching some adult’s butt. It was a big, lengthy affair with dozens of floats, marching bands, vintage cars, clowns, and candy they threw from the trucks that we all scrabbled for.

The Ukiah Memorial Day Parade was a considerably smaller affair, but Marta and I loved it. We missed the beginning, and by the time I thought to take my camera out, we were down to the vintage cars, the horses and the hogs. 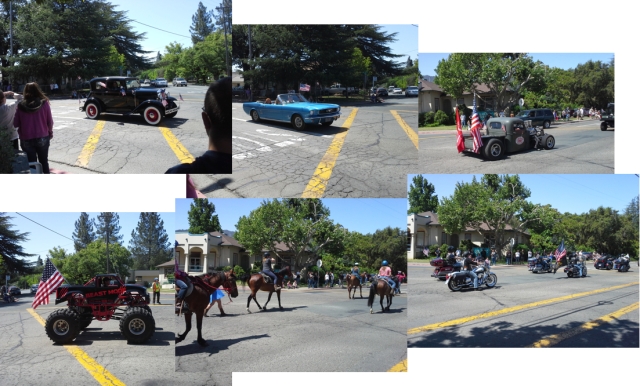 We got out again on Thursday evening for an astronomy geek-fest. Ukiah was one of six International Latitude Observatories around the world (the others being Cincinnati, OH; Gaithersburg, MD; Carloforte, Italy; Charjui, Uzbekistan; and Mizusawa, Japan) used as part of the 1899 – 1982 International Polar Motion Service program that measured the “wobble” of the earth’s polar axis.

Observatory Park, where the observatory still sits, is just one block from our new home. Shown in these pictures are the big oak tree in the center of the park with Marta standing beneath it, and some of the telescopes on display. The big brass telescope in the observatory itself was built in the late 1800’s, and had some of the finest optics of any in this lot. They had it set on Jupiter, and the four Galilean Moons (Io, Europa, Ganymede, and Callisto) were all clear, even though the sky was still light.

The rest of today, and tomorrow, are our last days of “vacation” — on Monday, the chaos of moving in starts. It will feel good to get settled.