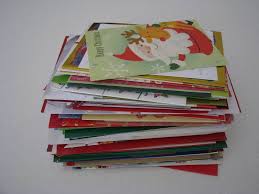 One of the things that happens when you move is that you end up going through your junk: the cruft of decades of accumulating things you should probably have thrown away, but for some reason, didn’t.

I had a drawer full of old Christmas cards. Many of them were Hallmark cards with nothing more than “– Bob & Betty” by way of personalization, and while Bob and Betty may have been my dearest friends in the world twenty years ago, keeping this card they signed hurriedly in a bustle of Christmas chores doesn’t really do anything but take up space.

On the other hand, a lot of the Christmas cards had letters in them. Mostly the newsy kind, sent out to hundreds of people; though some of my friends turned this into an art form, complete with 36-point tabloid headlines and amusing though highly-improbable stories about the past year.

Mixed into this collection were real letters, personal letters, some of them hand-written. Post cards, sent from exotic locations around the world. Bits of poetry and art.

One of the letters contained a bona fide fable, which I will relate here.

It seems there was an old farmer in the old country many generations ago. Like most of his neighbors, he was poor and scratched out a living from the dirt with the help of his son and his one possession of value, a good, strong mare.

One night, the son left the paddock gate open, and the horse escaped. Next morning, the farmer’s neighbors heard the news, and they all shook their heads and said, “What terrible luck!”

The farmer shrugged. “Bad luck, good luck, who can say?”

That night, the mare returned in the company of three wild horses who followed her back to her barn. The farmer heard them, got out of bed, and closed the gate. He now had four horses!

The farmer’s neighbors heard of this, and they all said, “My, what good luck you have had today!”

The farmer shrugged. “Good luck, bad luck, who can say?”

That very day, the farmer’s son, trying to handle the wild horses, was kicked and trampled, and both his legs were broken.

The neighbors all visited the farmer, and shook their heads, and said, “You have had the worst luck!”

The farmer shrugged. “Bad luck, good luck, who can say?”

A week later, an army marched through the village and conscripted every young man over the age of twelve to fight in a hopeless and bloody war many leagues distant — every young man, that is, except the farmer’s son, who could not march on his mending legs.