This Autumn, the Mendocino College/Community choir, in collaboration with the college dance department, will be performing a choreographed version of my Missa Druidica, as a part of their “Phoenix Project.”

The Phoenix Project was inspired by the recent catastrophic fires in California, but it is a broader cross-disciplinary artistic action intended to address the subject of homogenic climate change (climate change caused by humans) that underlies the increasing frequency and severity of big fires in California, as well as other climate catastrophes around the world — and addressing the fear of possible global extinction of our civilization, if not our entire species.

I wanted to write a little about how I see the Missa Druidica fitting into this artistic initiative. 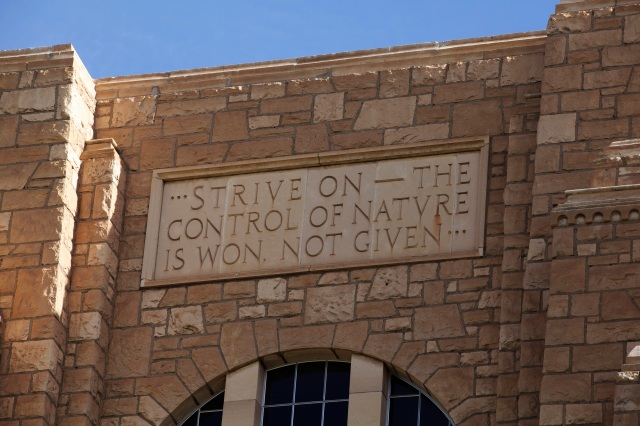 This was engraved on the face of the University of Wyoming Engineering Building when I was in college there. I remember walking back and forth across Prexy’s Pasture on my way between the dorms and the classrooms every day, and seeing this inscription. The building itself was demolished and replaced decades ago, and the new building no longer exhibits this sentiment so boldly. But it reveals something important about the mindset of the early twentieth century. As does the saying, taught to civil engineers in these same classrooms: “The solution to pollution is dilution.”

We see here a view of Nature as something unthinking and infinite in scope: something that can be used as we see fit, striven against with all our might; something that can withstand everything humans can throw at it, or take from it, and not be fundamentally moved. There is nothing in this view that even suggests the notion that our actions could actually break Nature. The seas and the atmosphere will always be large enough to absorb and recycle our pollution. We can never get close enough to actually controlling Nature to face the responsibility of keeping it running.

The true terror of homogenic climate change comes of realizing how profoundly we are out of our depth. We’ve started to move Nature into a different place, toward a tipping-point with completely unknown consequences, and we don’t know a fraction of what we need to know to fix the problem. People have suggested dumping massive quantities of iron into the ocean to boost plankton growth. They have suggested putting up space mirrors to cut down solar influx. They have fielded a series of increasingly outlandish proposals, trying to take even more control of Nature and force it back to what we want it to be. To run it properly.

Failing that, some think we can just pull up our tent stakes and move. Mars, perhaps. Some unspoiled Eden circling another star.

None of these proposals are, in themselves, completely unthinkable. But they miss the main point: if we don’t know how to fix a working system that we broke, we aren’t going to have a clue how to create a brand-new system that works. Even if we did, we’d break it, too.

We’re now like an Olympic swimmer who has naively set out to swim from San Francisco to Hawaii, and somewhere between the docks and Alcatraz, starts to panic at the prospect of drowning within sight of land.

The lesson of homogenic climate change is that our vision of Nature is wrong.

We desperately need a new vision of Nature.

I believe that this is precisely what art — all art — is about: it is, if you will, the sociological function of art. Art provides a vision. It may be reinforcing an old vision, like the endless Avengers franchise in the movie theaters in which clenched fists, gritted teeth, arrogance, manly teamwork, and a few superpowers will overcome anything, even the end of the universe. But art is also what gives us new vision: the inspiration and the hope to do the hard work of figuring out the details and changing what needs to be changed.

Particularly when what needs to change is our own behavior.

Ritual is an art form in which the entire community participates. As a long-time Episcopalian, I came to see all of the standing and sitting and kneeling and singing and call and response as a kind of art in motion, guided by the liturgy of the service. It’s quite beautiful, when done well.

You can compare the Episcopal rite to the Roman Catholic rite, or the Greek Orthodox rite, or the gatherings of the Methodists, or the Adventists, or the Baptists. You can look at the Islamic call-to-prayer, or the Jewish sounding of the shofar on Rosh Hashanah, or the Festival of Colors in India, or the sabbats of the Wiccans, or the sacred dances of the Pomo or the Cheyenne. Within all this incredible variety of form and style and color, there are common elements of motion and sound, of coming together and going apart, of introspection and reaching-out, all woven into the art of sacred ritual.

So in approaching the Missa Druidica, which sets the common form of the eight Sun and Fire rites of the Order of Bards, Ovates, and Druids to music, I am approaching it first and principally as art — art that supports a new vision of Nature.

What is the new vision of nature that druidic ritual points to?

The best way to understand that is to experience it, of course. What makes art work is that it imparts the vision without a lot of talk, at a level that goes deeper than talk. But I think I can share a few words about what I’ve come to understand.

The old vision, engraved in stone on a building above, is about power, and domination, and control.

The new vision is about cooperation, collaboration, and reciprocity.

What does that even mean?

I’ll just go straight to the seemingly nutty end of it first, and then work my way back.

Let’s talk about me talking with you. Who are you, anyway? I haven’t published this yet, so this conversation, as such, doesn’t actually exist. “You” are a completely imaginary person in my head. If and when I publish this, it may be read by old friends I know, but it’s also likely to be read by people I’ve never met, and never will. I’m talking to an imaginary “you” that is so diffuse as to be very little different from a blank wall. Yet I sit here writing, one-on-one, as though “you” exist, and as though I know “you” well enough to have this conversation.

Given the fact that trees actually communicate with each other through complex groundwater and airborne neurochemicals, they may know a lot more about what I’m saying/feeling/thinking than the imaginary-you would suspect. And by that same means, they can talk back to me: forests do speak. This all seems strange to city-dwellers plugged into computers and television screens, but most of the outdoorsy folk will be nodding their heads.

But the real point here is that it doesn’t matter whether I’m “actually” having a conversation with a tree. If I’m taking the time to have conversations with trees, imaginary or not, I will develop empathy with the trees: that’s just how the healthy human brain works. Trees will become a real and significant part of my world.

And that will change my behavior toward them.

In other words, talking with trees gives me a new vision of Nature.

I always think of the elves of Iceland. People in Iceland say, “Don’t piss off the elves.” The people of Iceland recently got worried enough about offending the elves to block the creation of a major highway that passed through elf-country. The folks pushing for the new road, looking toward whatever convenience or profit it offered, were upset about this … this superstition standing in the way of progress. But think it through: the road would destroy something. Roads always destroy something.

Our early nineteenth-century approach to Nature says, “So what? Nature is just dead space between important places where people live and make money, so when we bridge the dead space with a road, we add value. What kind of fool would stand in the way of that?”

Well, the elves who live in that “dead space,” for one. The forest creatures. The trees. The druids.

It’s a vision of Nature that recognizes that all that so-called “dead space” is producing free oxygen for us to breathe, cleaning our water at no cost to us, supporting the fungus and the bees and the small wildlife that allows our agricultural efforts to function at all.

It isn’t dead space. It never was.

This vision of nature is woven through the rites of the Order, and the many other druidic, shamanic, and native traditions, and I simply hope, as a composer, I’ve captured just a little bit of this in the few minutes that the music runs.

4 comments on “The Phoenix Project in Mendocino County”